back to Ghana 45 years later

I found a new toy

Google Earth is addictive. You can download it for free.
Go to FLY TO: and type in Nungua,Ghana and the map takes you right there.
Then in the list click on ABA HOUSE.
Posted by Aba at 3:47 AM No comments: 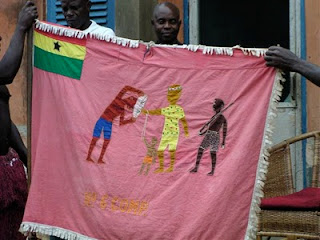 This is a photo of an asafo flag. Around Cape Coast (in Ghana) villages used to go to war against each other and someone would be at the head of the group "dancing the flag" and encouraging the men as they went into battle.
Each summer we offer a workshop at Aba House that teaches African textile techniques in the context of their history.
Here are the details for summer 2011.
Learn from Ghanaian artisans: asafo-batik-tie & dye-adinkra-kente...visit galleries-museums-outdoor markets and traditional villages
August 2 - 15 at Aba House in Ghana
$2400.00 includes: airport pickup-accommodations-breakfast-dinner-transportation in Ghana- workshop materials and participation
First deposit of $ 1200.00 due by April 5, 2011 & balance due by June 5,2011
Send a deposit by Jan. 1, 2011 & we will give you a $200.00 discount
get a friend to sign up & you'll both get 2 extra free days at Aba House
If you'd like to apply, let us know at aba@culturalcollaborative.org and we'll send an application.
Posted by Aba at 4:54 AM No comments:

Find Us Here Too

Aba
We want to introduce you to the people and culture of Ghana through workshops, tours, volunteer opportunities and visits to indigenous African villages. Get to know Ghanaians on a personal level.